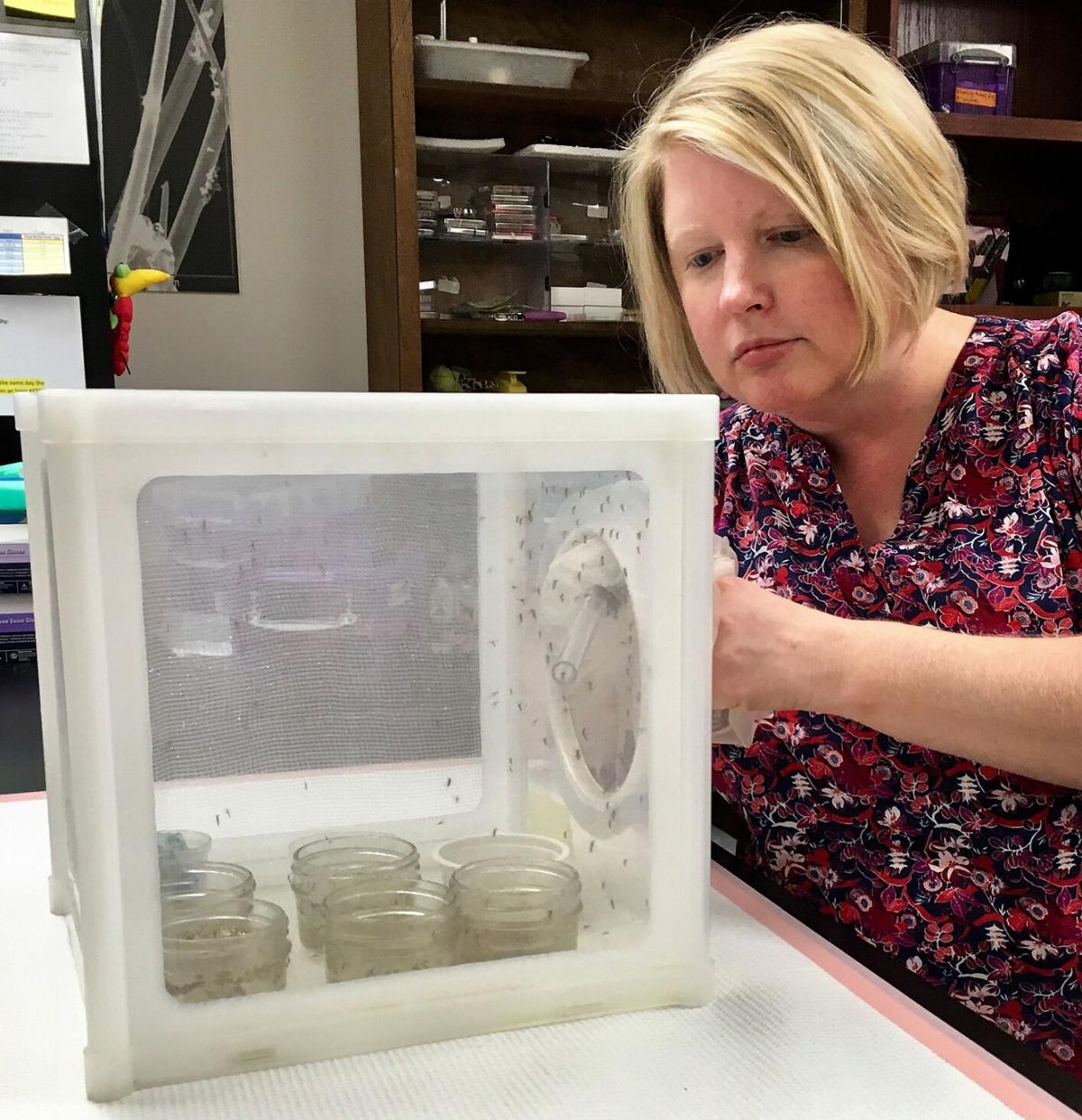 Eva Buckner at FMEL lab in Vero Beach with a pool of Southern house mosquitoes. 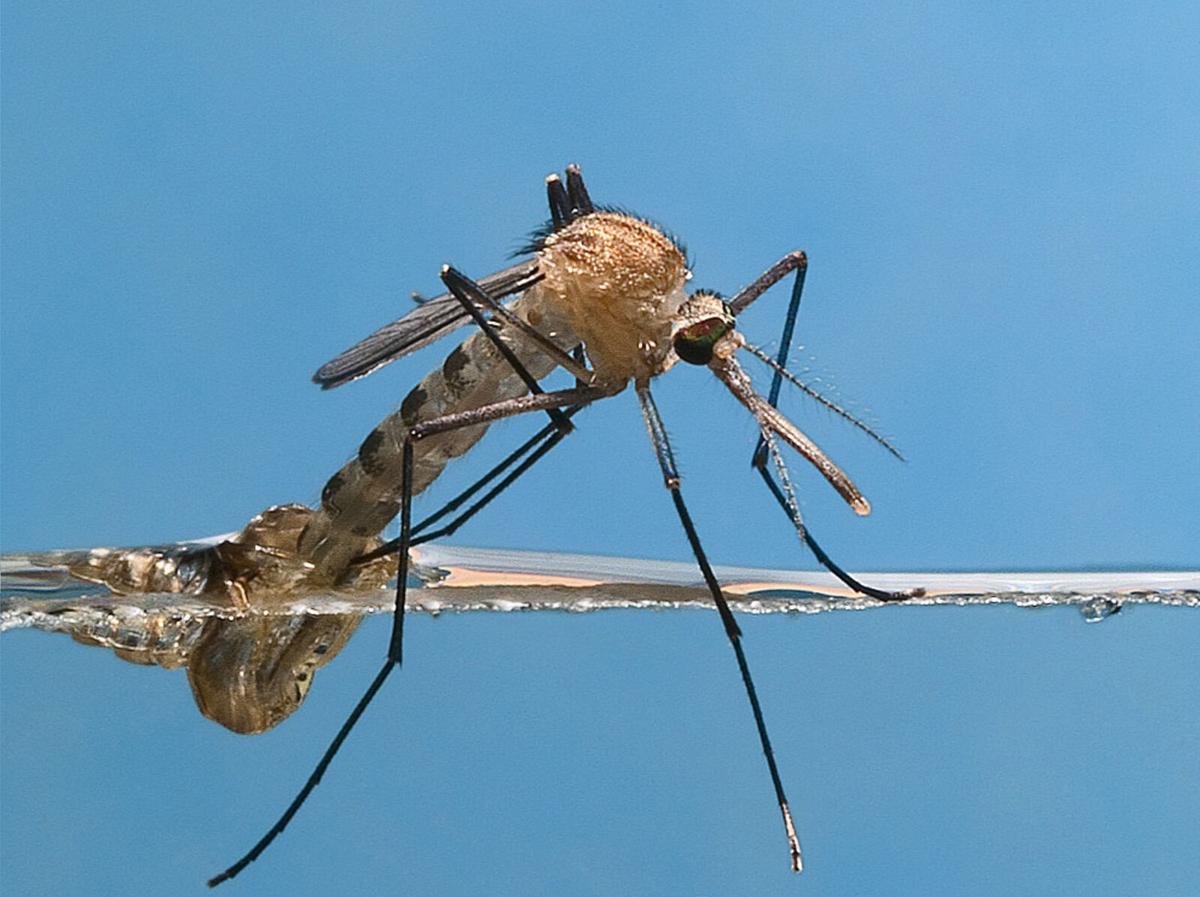 A Southern house mosquito emerges from the pupal exuviae, or cast skin, onto water.

TREASURE COAST ― West Nile virus is the leading cause of mosquito-borne disease in the United States, according to the Centers for Disease Control. It is usually spread through the bite of an infected mosquito in the summer through the end of mosquito season in the fall.

There are no vaccines or medications to prevent or treat West Nile virus, which has been confirmed this year in south Florida and appears to be inching up toward the Treasure Coast.

On Aug. 19, the Florida Department of Health in Martin County announced the West Nile virus has been confirmed in that county’s sentinel chicken flocks.

Testing of sentinel chicken flocks had been suspended from March 15 through about June 7 due to increased testing needs for COVID-19. Testing has resumed in Martin County and St. Lucie County, where two infections were found in chickens on July 23.

According to the Florida DOH, only about one in five infected people develop symptoms including headache, pain, and fatigue. Most recover within a week. The vast majority of infected people never know that they were infected.

The DOH says that less than one percent of infected people develop a serious, sometimes fatal, illness. Those who develop serious illness are normally over the age of 60 and/or people with weakened immune systems.

Symptoms typically appear between two and 14 days after the mosquito bite. People over the age of 60 and individuals with weakened immune systems are at an increased risk for severe disease.

The absence of therapeutics is why Eva Buckner, an assistant professor and medical entomology specialist at the University of Florida/IFAS Florida Medical Entomology Lab in Vero Beach, is focused on finding the best insecticide to kill the mosquito spreading the virus.

Miami-Dade County Mosquito Control has been sending samples of mosquitoes to the CDC for testing, and the CDC has found that just one species, the southern house mosquito, is testing positive for West Nile virus, said Prof. Buckner.

“This suggests that the southern house mosquito is most likely the mosquito species responsible for transmitting West Nile virus to humans in the current Miami-Dade outbreak,” said Prof. Buckner. “Southern house adult mosquitoes are frequently found to be resistant to insecticides, and resistance in Miami-Dade populations could be affecting the ability of Miami-Dade Mosquito Control to curtail the current virus outbreak.”

Prof. Buckner received a FDOH grant of $178,161 to study the insecticide resistance of mosquito populations in Florida. Mosquito control programs throughout the state have been sending Prof. Buckner’s Vero Beach lab mosquito eggs that she rears to adulthood and tests for resistance, seeking to determine which insecticides result in the highest mortality rates.

“Miami-Dade County Mosquito Control is one of the programs that we have been working closely with and have provided resistance data and management recommendations,” said Prof. Buckner.

The Florida Health Department and the Centers for Disease Control are urging residents to take measures to prevent being bitten by mosquitoes. These include avoiding being outdoors around dawn and dusk when mosquito bites are most common, wearing clothing that covers most of your skin, and using a repellent containing DEET when exposure to mosquitoes is likely. Also recommended are repellants containing oil of lemon eucalyptus.

According to the CDC, mosquito repellents containing oil of lemon eucalyptus or para-menthane-diol should not be used on children under the age of three years. DEET is not recommended on children younger than two months old.

Residents are also urged to take protective measures to remove standing water breeding sites around the home. Such measures include cleaning out eaves and gutters; drill holes in or remove old tires; turn over empty plastic pots; check tarps on boats and equipment for standing water; pump out bilges on boats; replace birdbath water once a week; empty water in plant trays and hanging baskets once a week; remove vegetation or obstructions in drainage ditches that prevent water flow; and clear out thick brush to increase airflow around the home.

A video “Drain & Cover” for mosquito bite prevention can be found at www.floridahealth.gov/videos/drain-and-cover.html.

Residents of Florida are encouraged to report dead birds via the Florida Fish and Wildlife Conservation Commission’s site, http://legacy.myfwc.com/bird/default.asp.