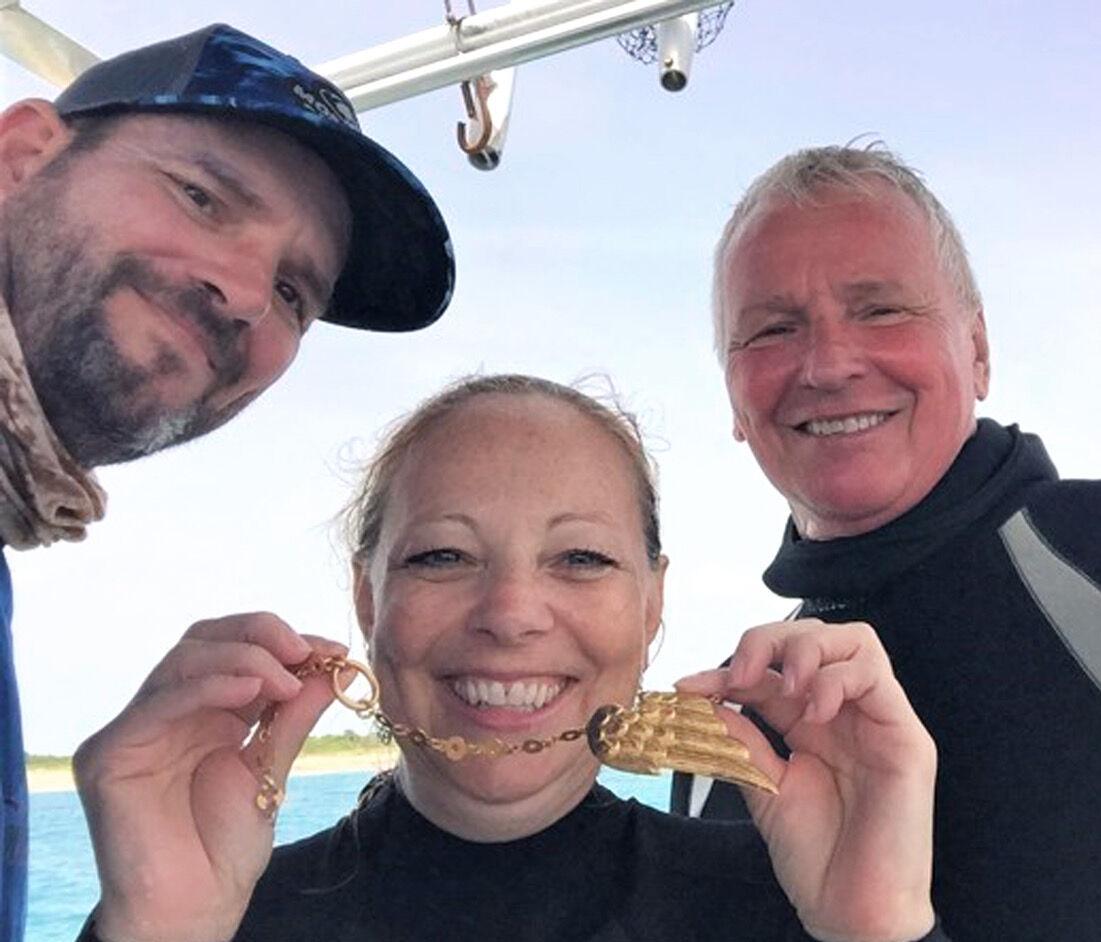 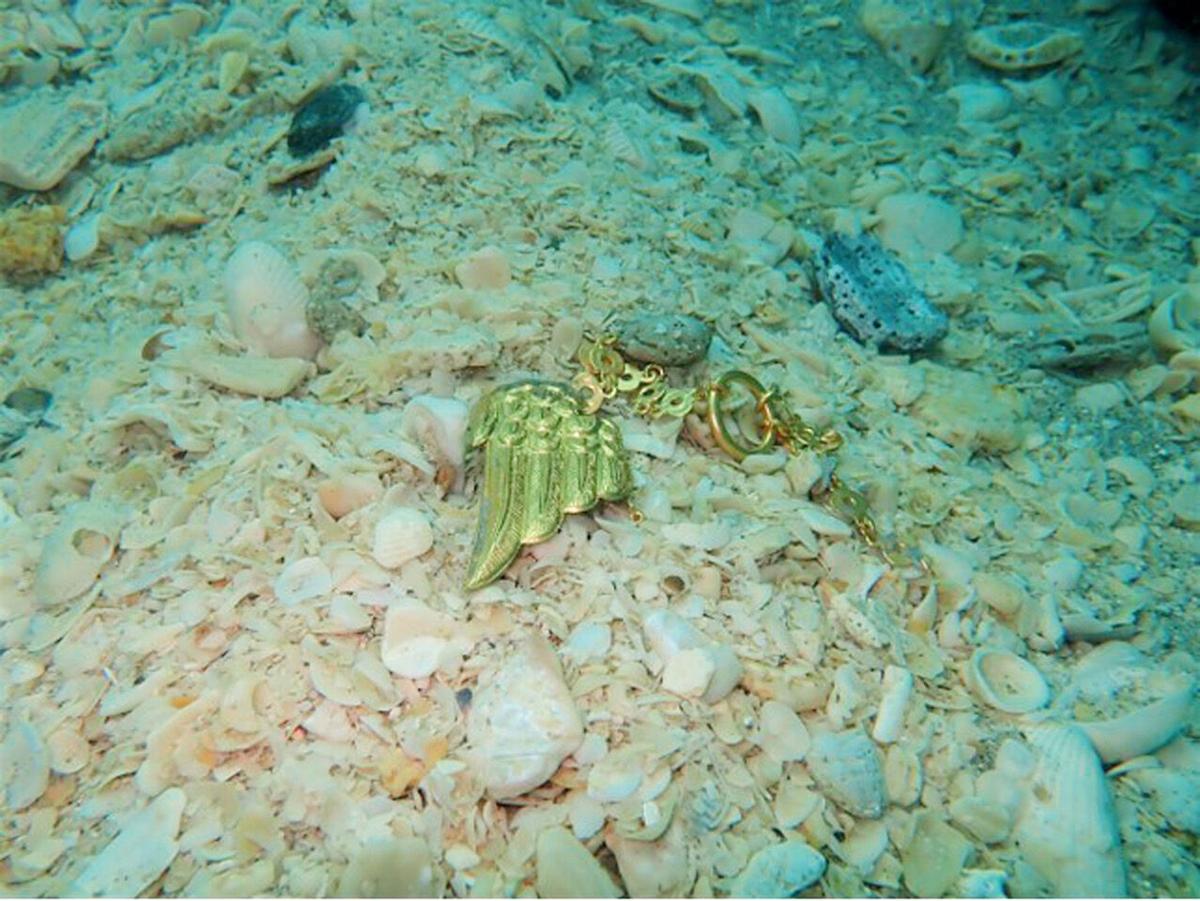 The bird wing in the crushed shell where it was found. 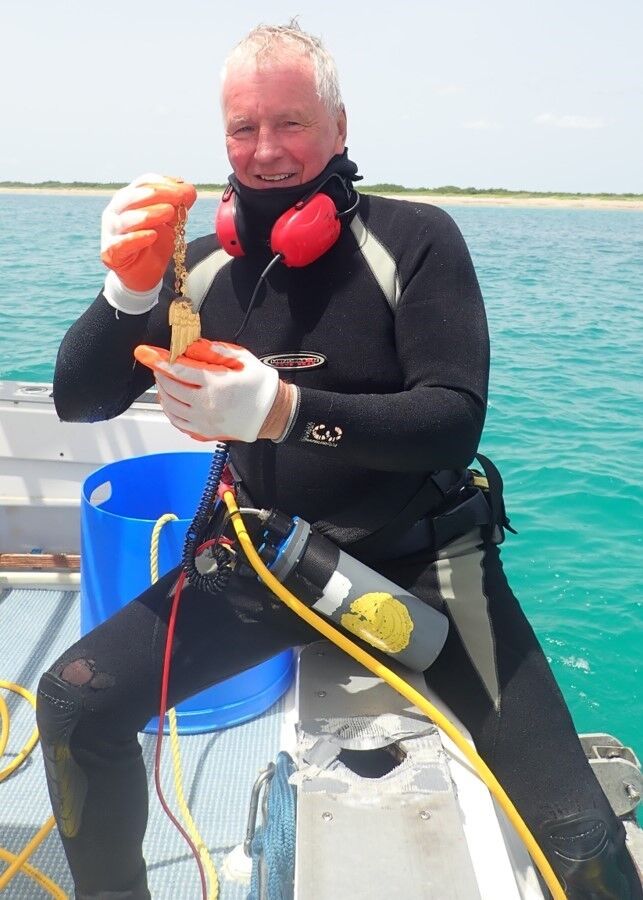 Captain Henry Jones with the gold bird wing he and his crew found. 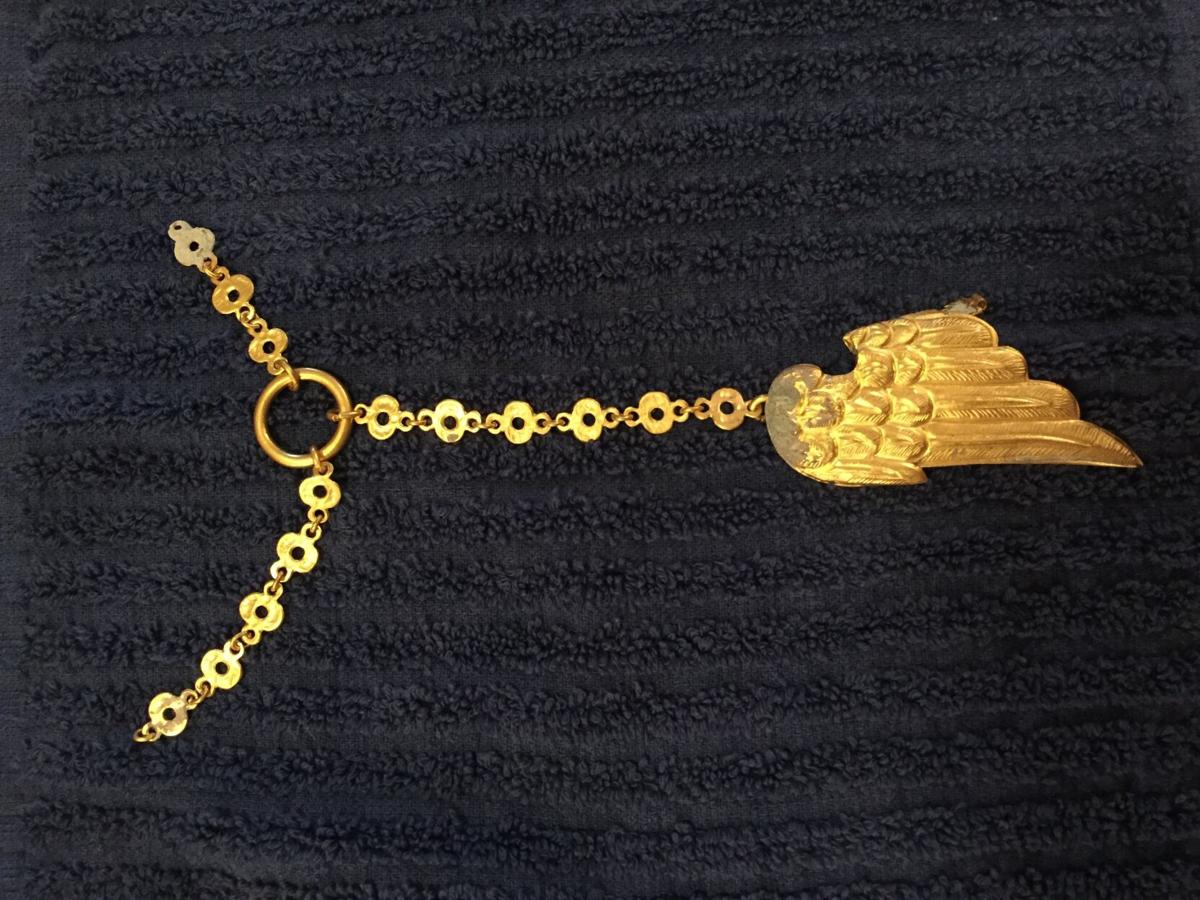 The bird wing found off the Treasure Coast by the 1715 Fleet Queens Jewels crew. 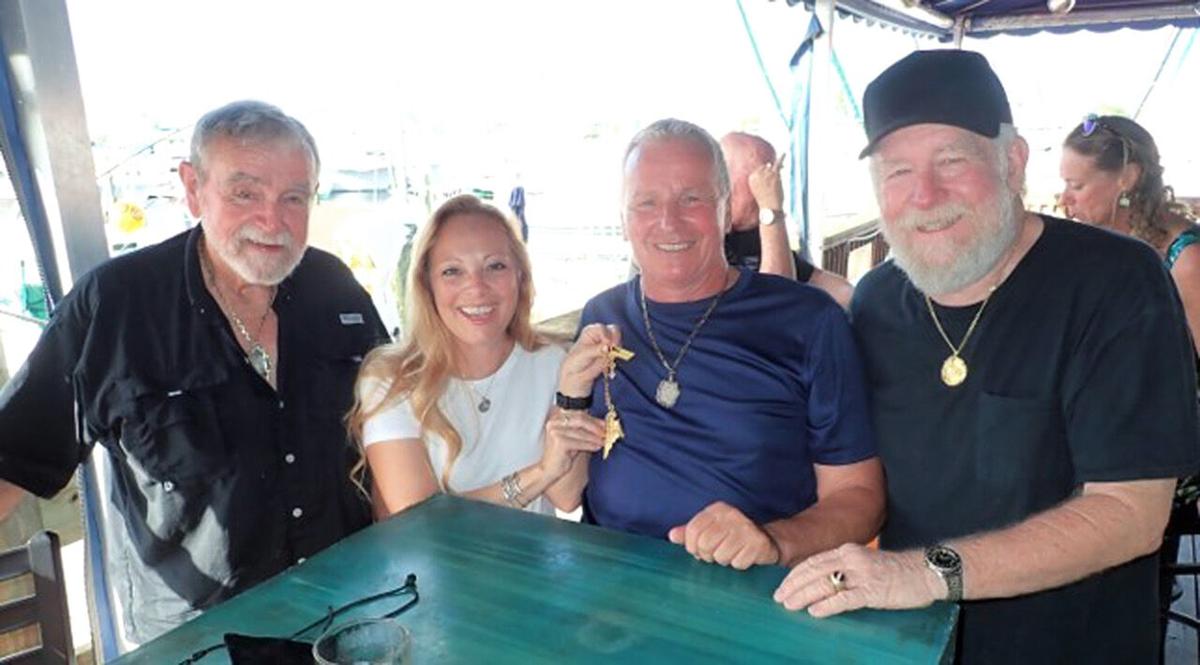 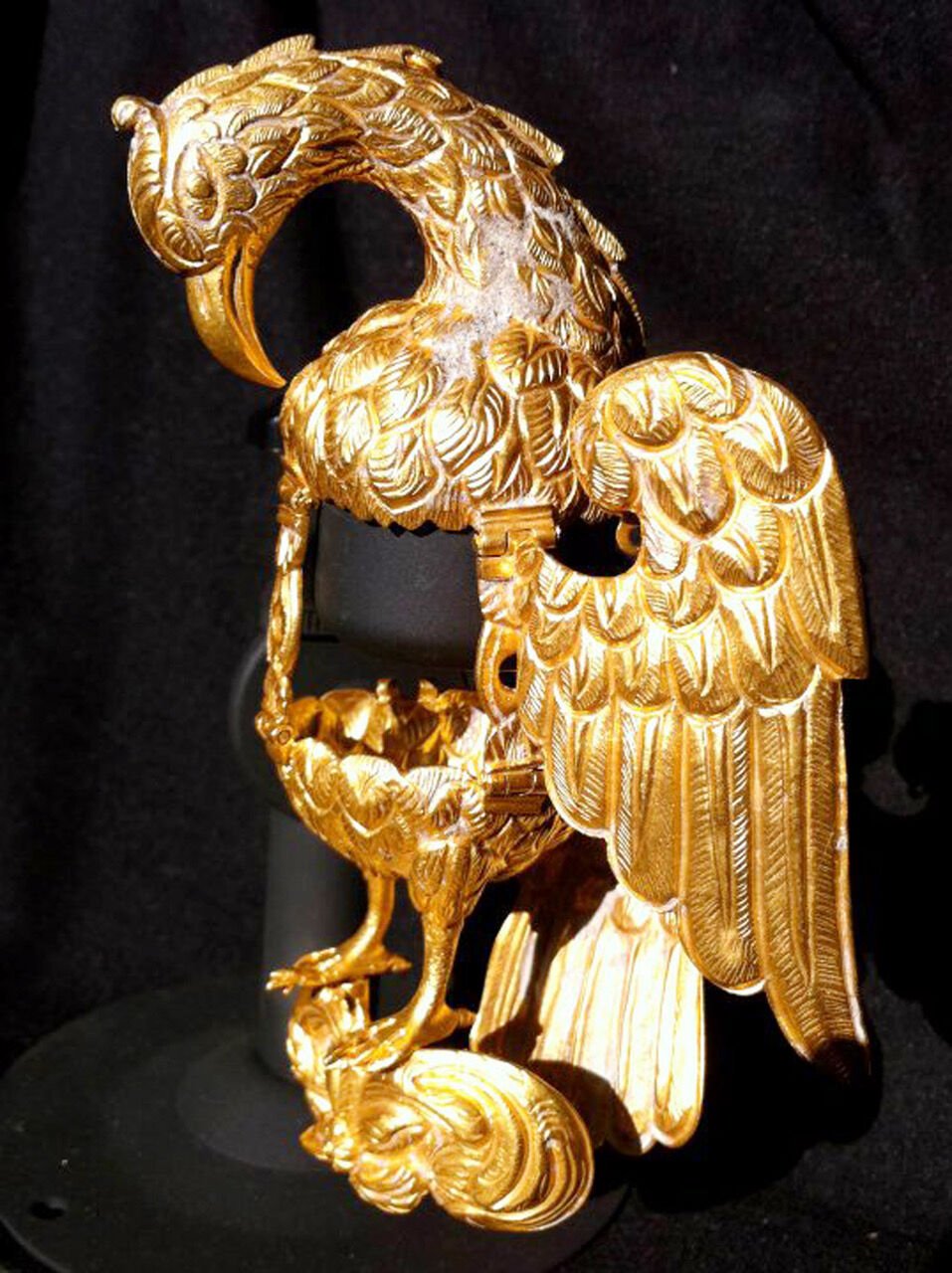 Gold bird found by Bonnie Schubert in 2010. The missing wing was just found by the 1715 Fleet-Queens Jewels crew.

TREASURE COAST ― In 1715, a fleet of ships loaded with treasure was returning to Spain from Havana, Cuba when it encountered a hurricane near Vero Beach. Eleven of the fleet’s 12 ships were lost, scattering treasure and giving the Treasure Coast its name.

True to that name, the waters of the Treasure Coast have, over time, revealed bits and pieces of the treasure. One significant find was a gold bird found in 2010. The bird was missing one wing.

On June 28, that missing wing was found, a discovery that crew member Tracy Newman called “the thrill of a lifetime.”

“The M/V Perfect Day and crew were off Douglass Beach on South Hutchinson Island, not very far from where the bird was found in 2010, when the wing was discovered,” Ms. Newman told Hometown News. “We dive down and search the sea bottom with metal detectors and listen for pings. In this case we were in heavy crushed shell when Captain Henry Jones heard the ping and proceeded to lift the wing from the shells.”

Despite the wing being small in size, the crew immediately knew what they had found.

“If you’re legitimately hunting treasure, you know what the bird looks like, you’ve read the story, you’ve seen the pictures, maybe even held it,” Ms. Newman said. “When Captain Jones lifted it out of the shells, there was no question as to what it was.”

The crew, subcontractors to 1715 Fleet-Queens Jewels, LLC, which owns the salvage rights to the wrecks, was in a spot that had been searched before.

“We study maps and look where others have been and what was found. We also look for places no one has been and, in this case, went to a spot where many have been. But the sea bottom is constantly changing, and on that day, she revealed her treasure.”

According to Ms. Newman, 1715 Fleet-Queens Jewels, LLC has all artifacts appraised. She said there is no way at this point to estimate the wing’s value. The original gold bird was sold to a private collector for $150,000.

The crew had previously discovered coins, china, pottery, and rings, but the wing was what Ms. Newman called their “most significant find.”

1715 Fleet-Queens Jewels, LLC conducts explorations and recoveries through its subcontractors, under the jurisdiction of the U.S. District Admiralty Court, and agreements with the State of Florida Division of Historical Resources. The federal and state rights to these wreck sites were established in the early 1980s.

“Once all recoveries from each field season are turned in to 1715 Fleet-Queens Jewels, LLC they are conserved, preserved and all archaeological data is recorded along with photographs,” Ms. Newman said. “Then the onsite recovery data is plotted on very detailed base maps for each of the wreck sites. Every dive, search, and everything we find is meticulously recorded, reported, tagged, and turned in according to our contract with them.”

Found artifacts are given to the state at the conclusion of each season. Some are returned to the finders, depending on the terms of their contracts. Some make money, but that doesn’t seem to be their primary motivation.

“Money can be made,” Ms. Newman said, but “a lot of money is also spent on boats, equipment, gas, maintenance. It is a lot of hard work, but we have fun doing it. When you find something significant, like the bird’s wing, it’s the thrill of a lifetime!”