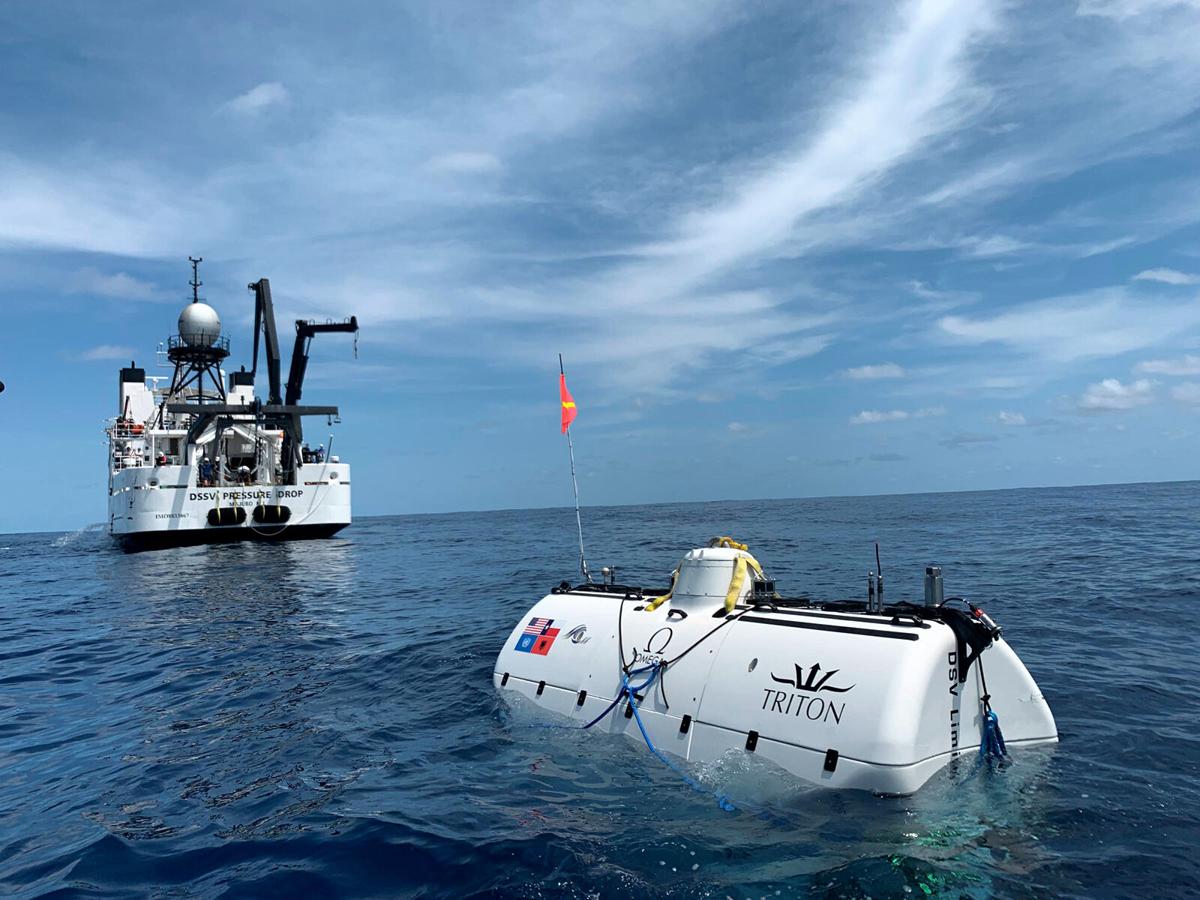 The Triton 36000/2 submarine is featured in a new Discovery+ series, “Expedition Deep Ocean.” 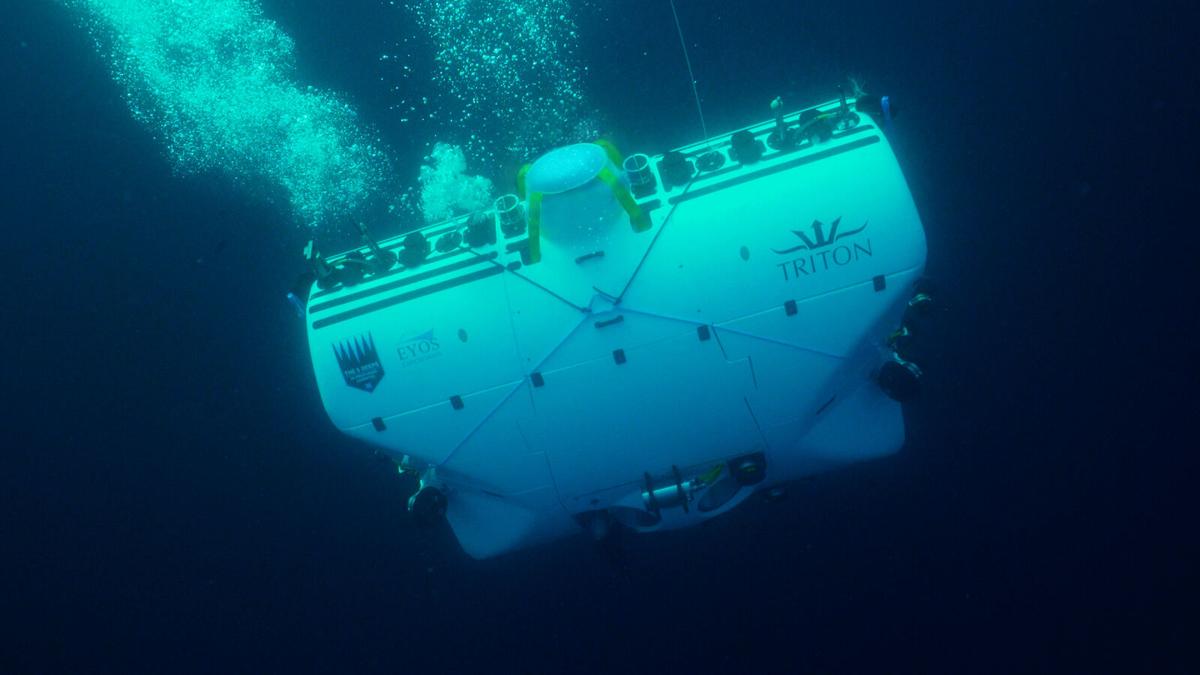 The Triton 36000/2, designed and built in Sebastian, is the only submarine in the world that can reach the deepest parts of every ocean on the planet. 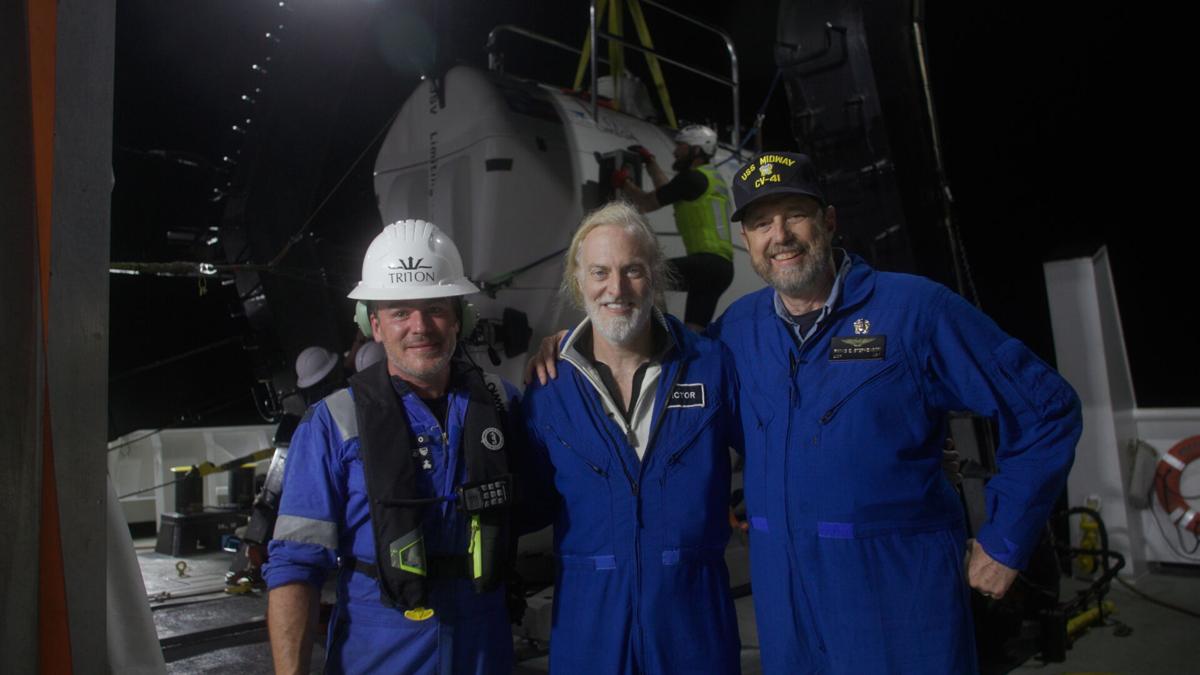 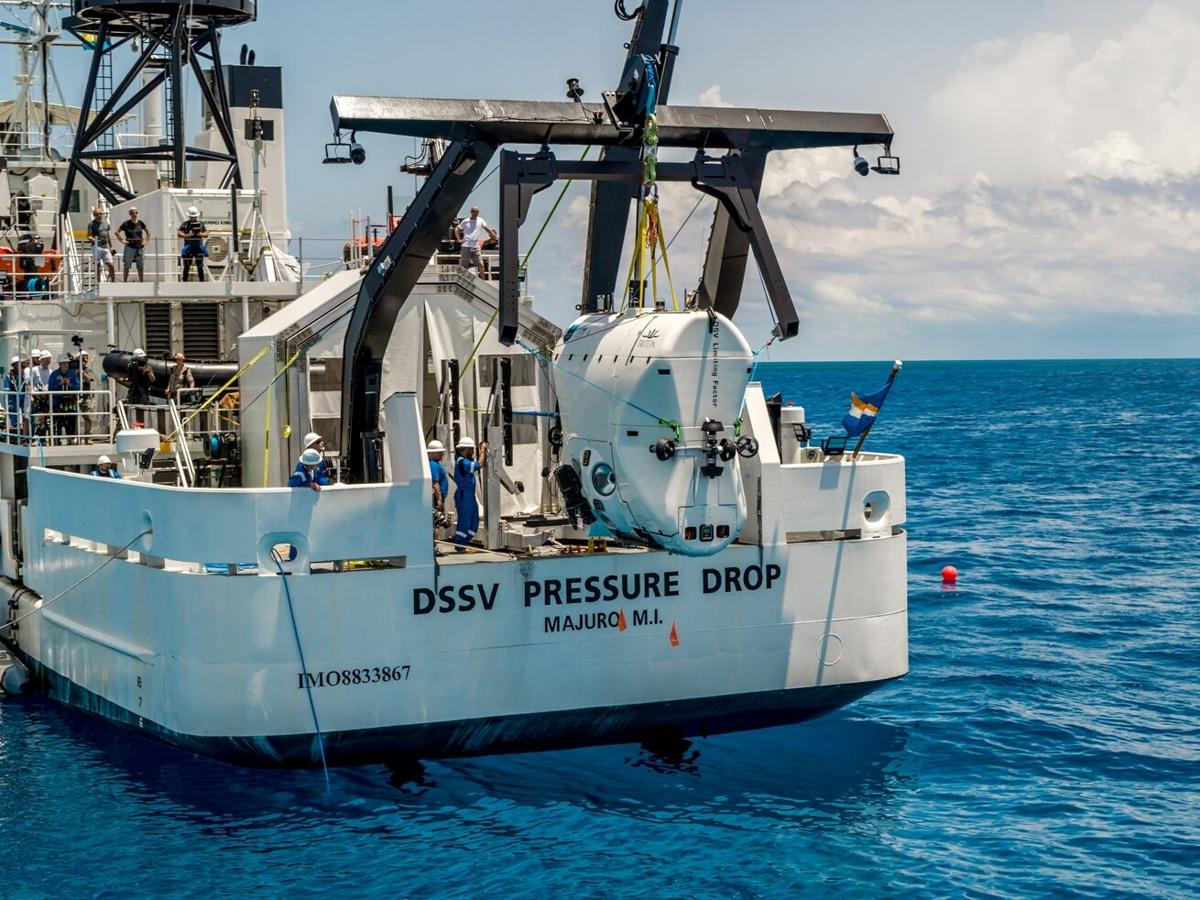 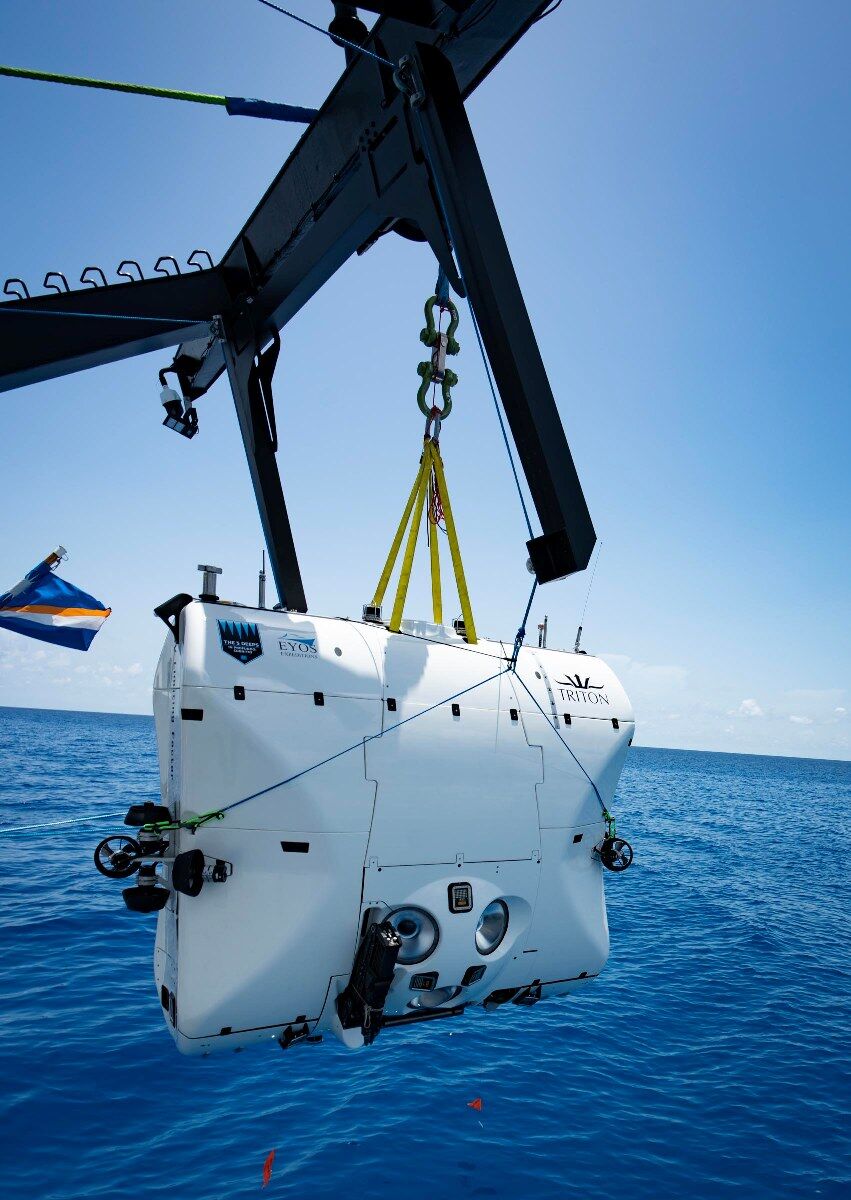 Ocean exploration is getting easier thanks to Triton Submarines

SEBASTIAN - A Sebastian company called Triton Submarines is turning the world of ocean exploration on its head.

Triton Submarines has designed and manufactured the Triton 36000/2, what the company is calling “the most prolific scientific research tool ever made available to marine scientists and oceanographers.” The submarine is the first that can dive to any depth in any ocean.

“When we completed the certification process, the surveyor accompanied me on a dive of 10,928 meters, or 35,853 feet,” Triton Co-Founder and President Patrick Lahey told Hometown News. “Our certification says ‘unlimited depth, any ocean.’ The surveyor said he had never before issued any certificate with an unlimited diving depth. It was a big moment for us as a company, and a great testament to the significance of what we had created.”

Triton Submarines is prominently featured in a new Discovery+ series, which debuted April 1, called “Expedition Deep Ocean.” The documentary series gives a behind-the-scenes look at a record-setting journey funded by explorer Victor Vescovo, a former US Navy Commander, and celebrates the 10-month-long expedition’s extraordinary achievement of reaching, for the first time ever, the deepest point of each of the world’s oceans utilizing the Triton 36000/2 (also called DSV Limiting Factor).

For Triton, the Five Deeps Expedition provided the ultimate validation, and final certification, for the world’s only full ocean depth submersible.

“The series is filled with really difficult challenges that we had to overcome,” Mr. Lahey said. “Each of the episodes presents challenges unique to the location, and really pushed the team, a remarkable group of people that I had the privilege to work with for the 10 months of that expedition.”

Triton’s Sebastian-based team is featured prominently throughout the series as they ensure the safe execution of world-first missions to the bottom of the Atlantic, Pacific, Indian, Artic, and the Southern Oceans, descending to a record depth of 10,928 meters.

“It is the first human-occupied vehicle that is designed to allow us to make repeated dives to any depths in the ocean on a daily basis,” Mr. Lahey said. “It’s a capability that has never existed before. We’ve unlocked a door, providing scientists, explorers, filmmakers with a means of being able to dive to any depths. These are the most remote and least understood areas of our oceans. Being able to visit those areas in safety and in confidence, in a vehicle that was designed for daily use at those extreme pressures, is really a game changer. It isn’t too big a stretch to call it a revolutionary craft.”

“We need to vigorously protect the ocean. I’m a big proponent of the 30/30 movement, that we set aside 30% of the ocean by 2030, marine protected areas, so they can recover from the tremendous pressure that we put on it with fishing and so on. A submersible is a craft that allows you to visit an area but to do no harm. These are electric vehicles, they don’t pollute. We don’t smash into stuff. We’re very careful in how we go down and visit an area. We leave it the way it was when we saw it. I’m a big fan of protecting the ocean, that’s exactly why I do what I do, because I love the ocean.”

The same Triton submersible featured in the Discovery+ series was just used to complete the world’s deepest shipwreck dive in history, the USS Johnston, a US Navy destroyer that sank in battle in 1944. The ship was sunk during an intense battle against Japanese forces off Samar Island in the Philippines Sea during the Battle of Leyte Gulf, widely cited as the largest naval battle in history.

The wreck is the deepest shipwreck ever located, at a depth of 21,180 feet. Victor Vescovo, who also funded the Five Deeps Expedition, piloted his Triton sub to the wreck during two eight-hour dives. These constituted the deepest wreck dives, manned or unmanned, in history.

The highly maneuverable submersible was able to conduct a thorough survey of the wreck to verify its identity, construct a map of its layout, and obtain high-definition imagery that can be used by naval historians.

Triton Submarines was initially based in Vero Beach. They moved to Sebastian in search of a larger facility.

“We outgrew the premises that we were in,” Mr. Lahey said. “There just wasn’t enough room there. We loved being in Vero, but I needed to find a bigger facility. Also, it was important for me to find a climate-controlled building so that even during the dog days of summer when it’s 100 degrees we could remain productive. The location we have in Sebastian is a 50,000 square foot building, which we now own, and we are occupying the back 25,000 square feet. In the new facility we’ve been able to spread out and make better use of the room we have to build multiple sub orders. It’s an important part of the company strategy to continue growing.”

In addition to crafts like the Triton 36000/2 used in the Discovery+ series, Triton develops submersibles for private yachts and the cruise ship industry.

“We’re talking about much bigger subs that carry more people for the leisure and tourism industry,” Mr. Lahey said. “We delivered a sub last year to a company in Vietnam that carries 24 people. It’s important to us to get ordinary people the opportunity to see the ocean from the vantage point of a submersible. If you do, you’ll change their perception of the ocean forever, and create real advocacy and real interest in the ocean. That’s what the ocean needs.”

While these other submersibles are the bread-and-butter of the company, the sub that can dive to the deepest depths of the ocean is the glamour piece. The Triton 36000/2 opens up to exploration the 70% of the world’s oceans that were beyond the reach of mankind, with a full science suite and ultra-high definition filming capabilities.

While the Triton 36000/2 is equipped for almost anything, it doesn’t have a bathroom. Divers must use a low-tech pee bottle, which Mr. Lahey calls a “human range extender.”

“One of the things you do is avoid consuming huge amounts of liquids before you go diving. I recommend that you stop drinking any liquids the night before, and do your best to de-water before you get in. We do carry what we call “human range extenders” - a nice way of describing a pee bottle - so you can go to the bathroom into a container.”

Another challenge yet to be completely overcome is the cold. The Triton team has chosen to not divert too much of the vehicle’s energy system to creating heat.

“We have a limited amount of climate control, but it’s sort of the equivalent of farting against thunder. When you get down into the extreme depths of the ocean, where the water temperature is actually below freezing, the hull, which is made of titanium, chills to ambient water temperature. Even with a limited heating system, and you can’t devote too much energy of the vehicle towards heating, so what you do instead is you dress appropriately. So it gets extremely cold in the sub, and these are very long dives. You’re in deep water, and it takes a long time to get to depth, then you want to do quite a bit of exploration, and then it takes a long time for you to get back to the surface. These dives are often 12-14 hours in duration, and the waters are always cold, no matter which ocean you’re in.”

Now that Triton has developed this tool, Mr. Lahey says the scientific applications are endless, and exciting.

“To begin with, there are more than 100,000 seamounts that have never been explored.” A seamount is an entirely submerged mountain, typically formed from extinct volcanoes.

“The animals that live on seamounts tend to develop in isolation, like the Galapagos Islands. There are all kinds of unique animals that have evolved in isolation. Scientists say that on any dive to a seamount you’re going to find new species.”

“There are a lot of things we don’t know about the ocean, in particular these deepest, most remote parts of the ocean that we’ve never really been able to visit. There’s a lot to be learned, a lot to be seen, a lot we can gleam about our planet and its development and history by visiting these trenches. Visiting these places is an important part of understanding who we are.”

“Later this year we’ll be announcing the delivery of the very first submarine that can dive to 7,500 feet with a completely transparent pressure hull. It will be the thickest acrylic sphere ever made. We also have a design to build a sub that will go to 13,000 feet with an acrylic hull that’s even thicker. Ultimately it’s our intention to build a full ocean depth capable vehicle with a transparent pressure hull.”

To view the full documentaries, you’ll need a subscription to Discovery+, the streaming service of The Discovery Channel.