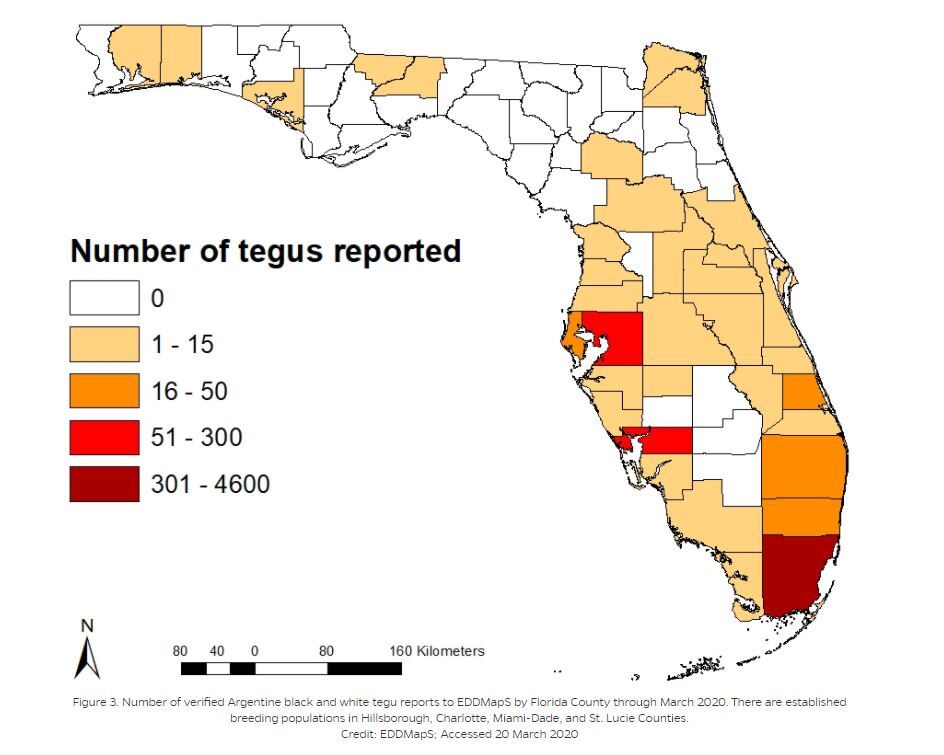 Verified Argentine black and white tegu reports. According to FWC, there are established breeding populations in St. Lucie, Hillsborough, Charlotte, and Miami-Dade counties. 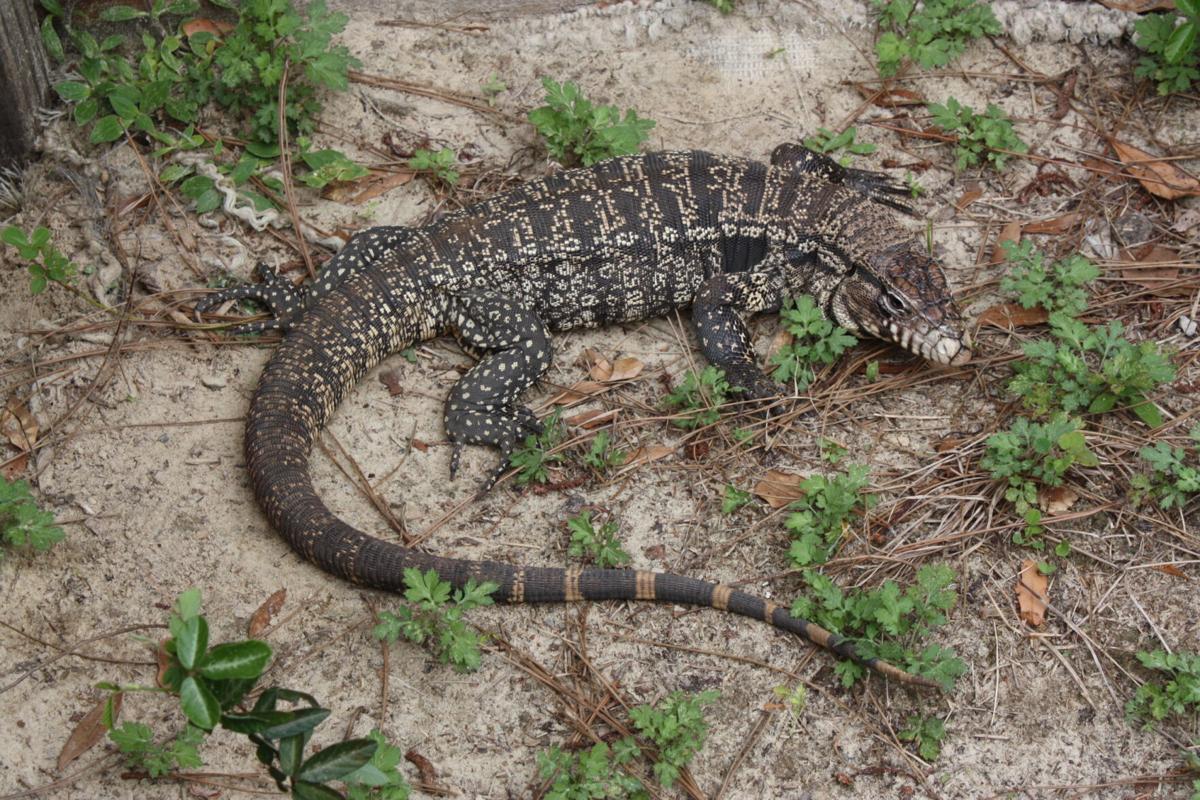 An Argentine black and white tegu, part of the growing number in the state and a danger to numerous native animals. 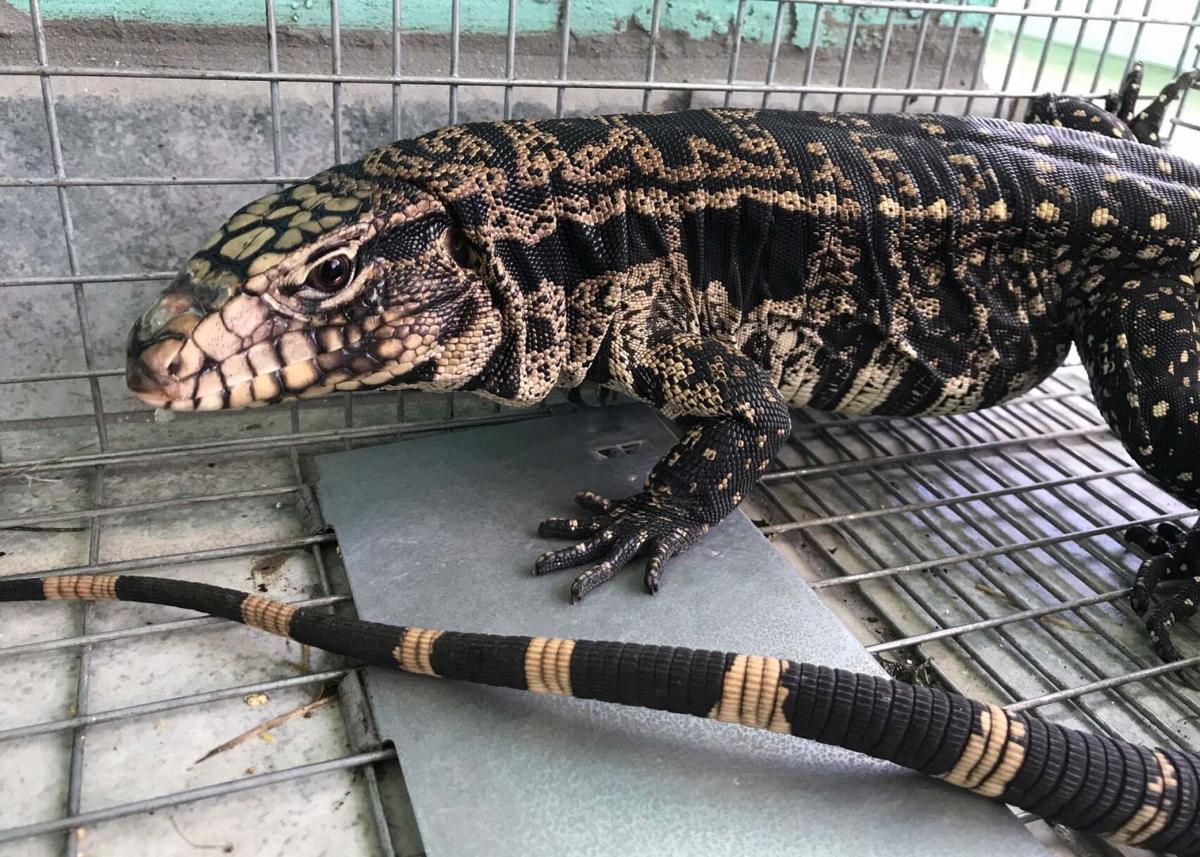 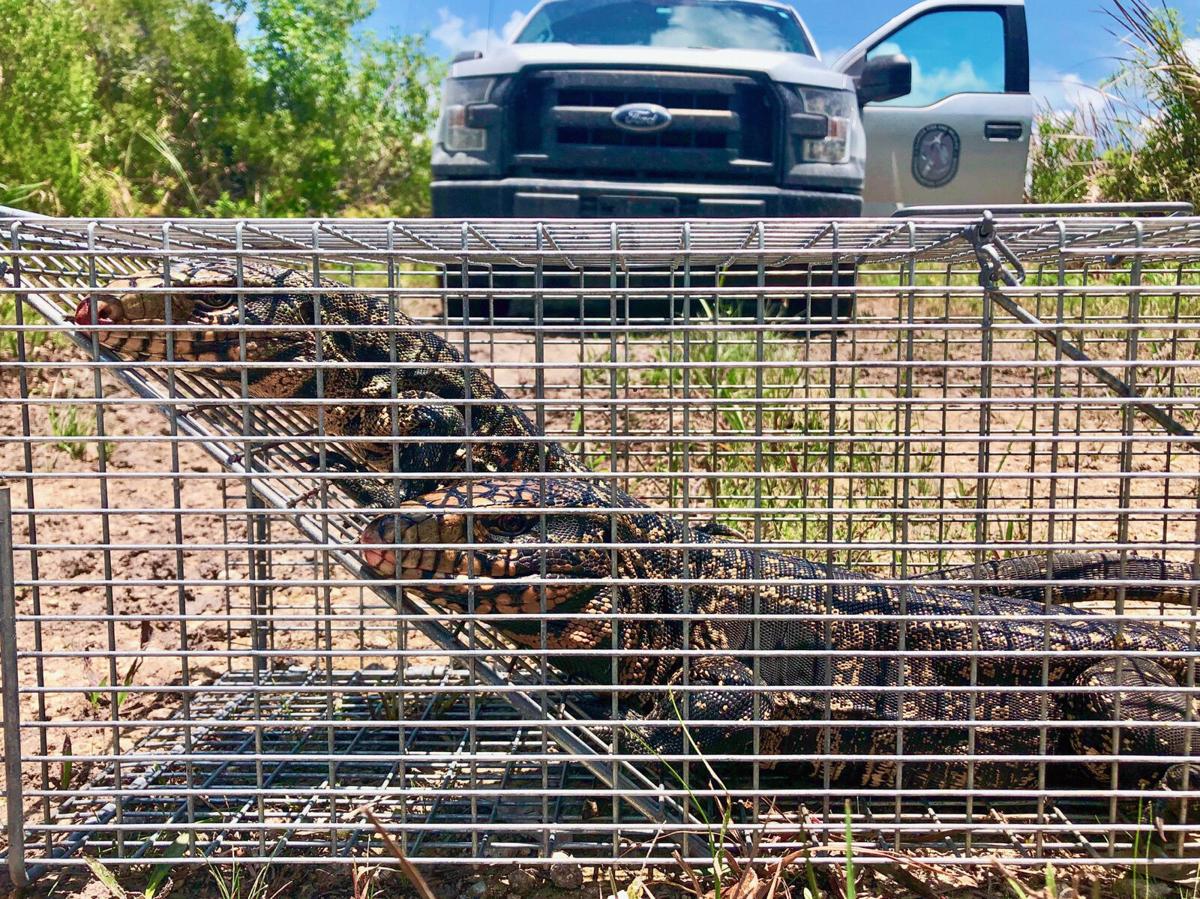 Non-native Argentine black and white tegus, introduced to Florida for the pet trade, are now being found statewide. 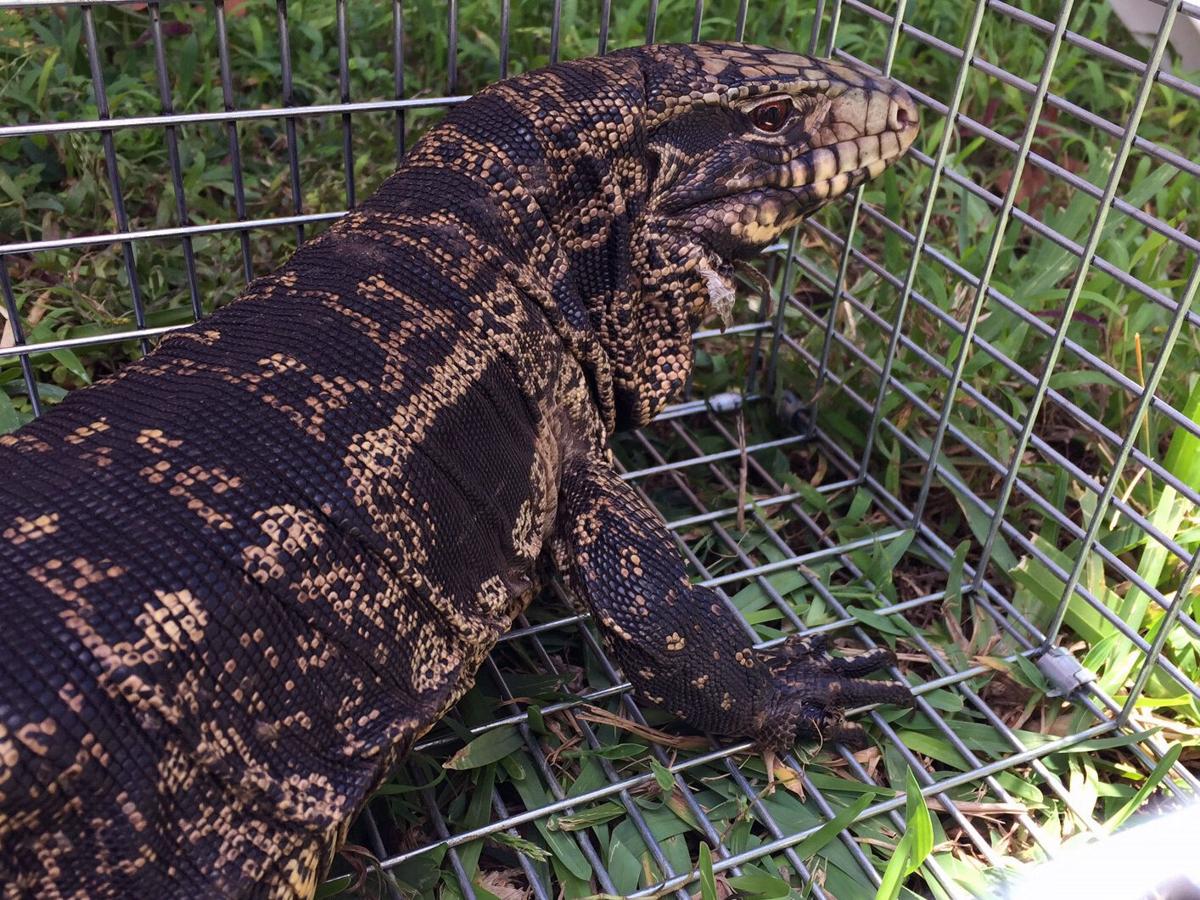 A breeding population of non -native Argentine black and white tegus has been found in St. Lucie County. 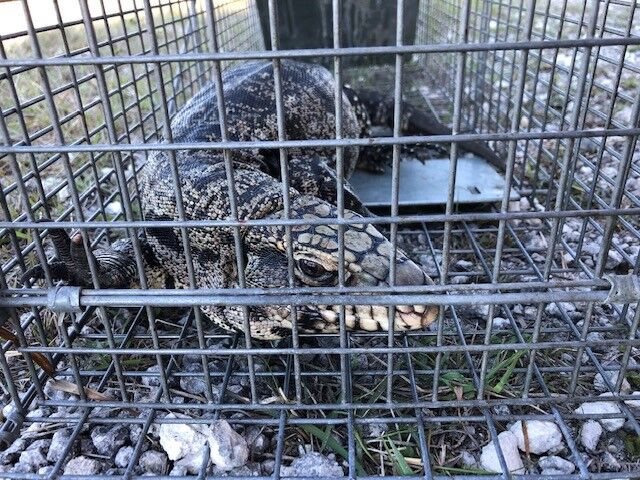 STATEWIDE ― Argentine black and white tegus are one of the largest non-native invasive lizard species, posing a significant threat to the biodiversity and ecological integrity of Florida’s natural areas.

According to the University of Florida scientists at the Institute of Food and Agricultural Sciences and partnering agencies, the spread of tegus has critical implications for native wildlife, numerous natural areas, and restoration efforts for Everglades National Park.

The UF scientists say the Argentine black and white tegus, native to South America, were brought to Florida for the pet trade. They grow to four to five feet long. Female Argentine tegus lay approximately 30 eggs per clutch in the spring and summer. They may live 15–20 years

The scientists say tegus have spread beyond south Florida and are likely to continue establishing without sustained control. Argentine black and white tegu populations have distinct populations established in four Florida counties, including St. Lucie County.

Tegus have been reported in 31 additional Florida counties, including Indian River County and Martin County, which may represent individuals who are escaped or released pets who have not yet formed breeding populations. Tegu sightings have also been reported in four Georgia counties. Both the number of tegus removed, and the effort expended to catch them have increased. The totals documented by the scientists do not include tegus removed by private trappers, some of whom report removing more than 400 tegus in a year.

The wildlife experts and scientists have developed programs to locate, survey, monitor, and trap tegus where they have spread and established populations, to reduce their numbers and control the species in Florida before it continues to spread.

“Our work has shown that tegu populations can be controlled with sustained trapping efforts and resources,” said Melissa Miller, invasive species research coordinator for The Croc Docs at UF’s Fort Lauderdale Research and Education Center. “Knowing we can achieve success in reducing tegu abundance and dispersal allows us to strategically prioritize efforts and protect at-risk native wildlife. However, dedicated multi-year funding is needed to continue enacting a successful interagency tegu control program across the landscape.”

The United States Fish and Wildlife Service is aiding the Florida Fish and Wildlife Conservation Commission in coordinating control efforts in St. Lucie County, providing traps, transporting tegus captured by homeowners, coordinating the work of a tegu trapping volunteer living in the area, and providing traps to the St. Lucie County Sheriff’s Office for the capture of tegus occupying their outdoor training facility.

Tegus are omnivores who eat fruits, vegetables, insects, and small animals including protected species. They prefer eggs, and can survive freezing temperatures during winter months.

The scientists have mapped out a timeline beginning with the tegu’s introduction into south Florida for the pet trade and their spread into areas impacting wildlife, threatening nesting areas of protected and endangered species, and entering natural areas including Everglades National Park. Collaborative interagency efforts began in 2009 to assess the south Florida tegu population through surveys, trapping, radio-tracking, and removal.

“Working with our federal and state partners, as well as with public and private land managers, we are identifying strategies and funding to help contain this threat,” said Larry Williams, the USFWS Florida Ecological Services state supervisor. “Research and risk assessments conducted show that tegus have a high potential to become the next Burmese python in Florida.”

The USFWS regards the establishment and increase in tegu numbers in Florida as a direct threat to many threatened and endangered species, especially egg-laying species. The spread of tegus can impact the Everglades restoration efforts by increasing predation on threatened and endangered species, including the American crocodile, the Key Largo woodrat, the Cape Sable seaside sparrow, and all other ground-nesting birds and reptiles.

“Limiting the spread of tegus is a priority for the South Florida Water Management District because they prey upon native wildlife, including small mammals and reptiles,” said Rory Feeney, bureau chief of land resources at the South Florida Water Management District. “Reducing the invasive tegu population and limiting their expansion is an important component of Everglades restoration.”