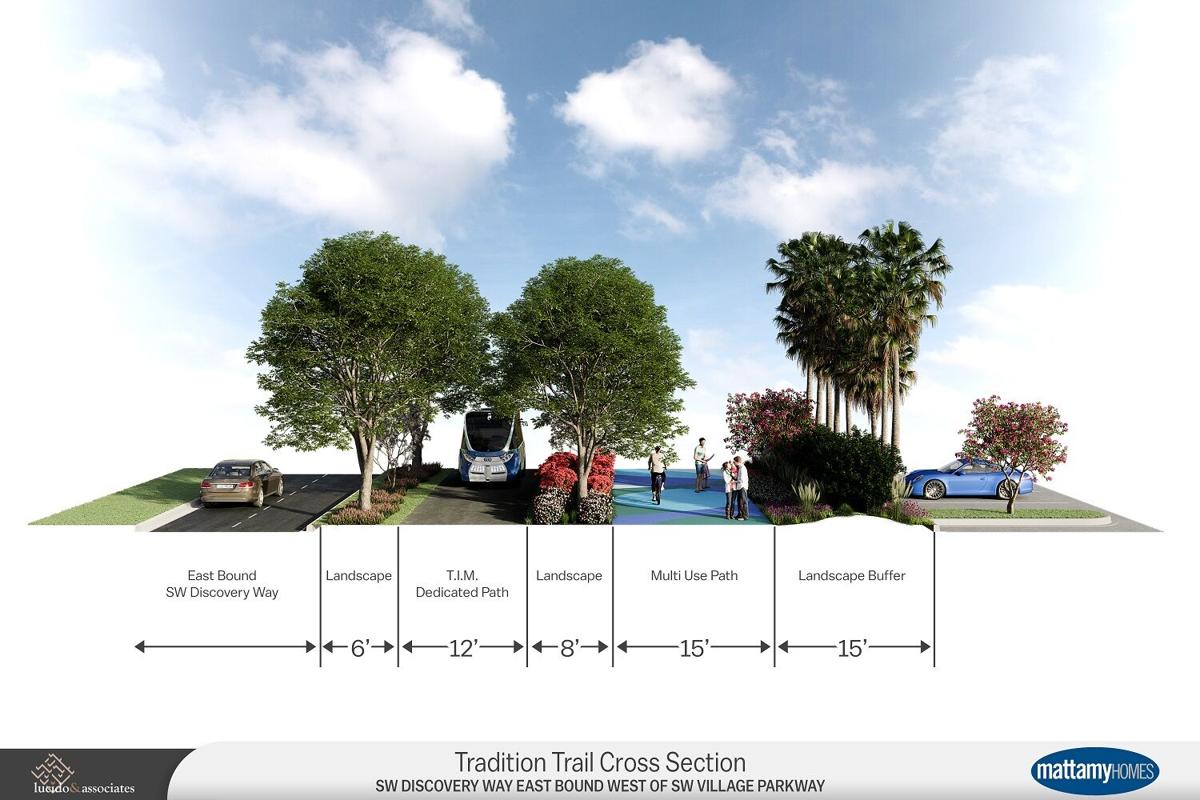 The Tradition Trail is a 14-foot-wide multi-use pathway  connecting the Tradition Town Center to Discovery Way and Manderlie at Tradition via Community Boulevard. 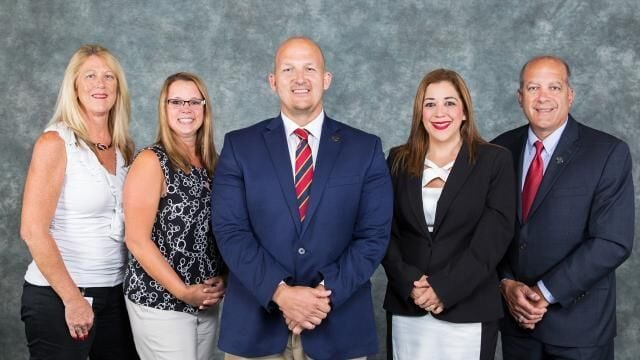 1.2-mile section will extend east along Discovery Way and south on Village Parkway and include new Beep line

PORT ST. LUCIE – With its unanimous approval April 19 of the second phase of the multimodal Tradition Trail, the City Council here envisioned a grand leap into the future in which they see autonomous vehicles one day linking Tradition with Becker Road and the Shoppes at Veranda Falls east of the Florida Turnpike.

The first phase of Tradition Trail – a 14-foot-wide multi-use pathway – is now completed connecting the Tradition Town Center southward to Discovery Way and Manderlie at Tradition via Community Boulevard. Featuring thematic color treatments at seating areas and intersections, Phase 1 of the Trail includes the Talk in the Park Trailhead, a large gathering spot characterized by a water feature, shade canopy and e-bike charging stations. Area residents and visitors can access the Trail on foot, via bicycle and e-bike and even aboard one of the Tradition in Motion autonomous Beep vehicles, which travels west on Meeting Street and south on Community before making a stop at Talk in the Park. A separate Beep driverless vehicle travels east from the Town Center to The Landings. West Palm Beach-based Mattamy Homes developed the Tradition Trail and the TIM autonomous jitney services as part of its development agreement with the city in the Southern Grove Development of Regional Impact.

As he described Phase 2 of the Trail to Council members, Mattamy representative Steve Garrett envisioned both the Trail and Beep vehicles one day uniting the Western Grove, Tradition and Southern Grove DRIs into one seamless community.

“Tradition Trail is envisioned in its simplest form as a two-pathway system,” he explained. “A multi-use path and the second path being a dedicated Tradition in Motion vehicle pathway. Phase 2 is running from Community and Discovery’s intersection east along Discovery to Village Parkway and then south on Village Parkway all the way down to what is the East-West-2 future right of way. This is about 1.2 miles in length, [but] you’ll see soon that it’s envisioned to continue southward as well.”

Unlike the first phase of the Trail that has the sensor-and-camera-guided Beep vehicles sharing the roadways with other vehicles, Phase 2 incorporates distinct TIM travel lanes separated from the 15-foot multi-use pathway and adjacent roadway by a low berm wall or landscaping. The intersection of Discovery Way and Village Parkway would actually serve as the connection point between the two phases.

“That dedicated TIM path is being proposed on the eight-foot sidewalk that currently exists on Village, and that multi-use path would be new construction and 12 feet in width,” Mr. Garrett added. “We’re proposing a thematic color treatment, the Trail logo and color scheme to identify the pedestrian crossings across Discovery and then across Community and then south on Discovery to [the] Heart in the Park Trailhead, where we are proposing the public art element.”

“It’s very odd, especially if you have to make a right turn up towards Manderlie and how you have to go all the way into the intersection where the stop sign is,” she said. “We want to make sure we address the improvements before we stick to this current path. We’re only going to have more people going into that area, and it’s only one lane on each side.”

Mr. Garrett emphasized that the current confusion had to do with the ongoing expansion of both the Trail and TIM system.

“We will come up within the construction plans how to make this functionally work,” he replied. “We understand it’s a very confusing intersection, predominantly because north-bound on Community from Discovery there’s so much pavement, and you can only do so much with the marking and so forth that’s there.”

The Mattamy Homes representative also informed the Council about a significant change made to the original Tradition Trail plans after receiving input from the Treasure Coast Regional Planning Council on the Southern Grove section.

“It was originally envisioned for the Trail to have both of those systems, this TIM and a multi-use path, running in tandem through the conservation areas,” Mr. Garrett explained. “We’ve pivoted, and are proposing that TIM and the multi-use path continue all the way down Village on the west side all the way to Becker. In addition, we are still committed to the 12-foot multi-use path running through the conservation areas. It is hopeful that through BUILD grants and other funding as the city and the Jobs Corridor grow east of Village, TIM loops could be added. It keeps the TIM autonomous system highly visible within Southern Grove [and] not hidden away in a conservation area.”

At the conclusion of his presentation, Mayor Oravec lauded Mr. Garrett for his innovative work to-date in the city.

“What’s happening in Southern Grove, on Becker and the projects that you’ve been associated with, are truly special and you should be proud of your work,” he said. “Success has many fathers and mothers and failure has none, but this is a success.”

Vice-Mayor Martin concurred as she made the motion to approve the second phase of Tradition Trail, which was seconded by Councilwoman Stefanie Morgan.

“I think it’s excellent – I’m so looking forward to it,” she said. “It’s bringing everything together from the trails to micro-transit. It’s just remarkable, and I love it.”

During final discussion before the vote, Mayor Oravec emphasized the need for city staff and others to ensure multi-modal planning goes beyond the confines of the three DRIs.

“Whether it’s the C-23, whether it’s along Becker, you have to make that connection east-west and you have to get to the other side of I-95 for this to be real,” he insisted. “Couldn’t you just imagine this trail system being built into Becker connecting this to what has happened over by Veranda? We have to make sure that the parts strengthen the whole, and we have to incorporate that citywide. That’s going to be a continuing challenge for this Council and this team.”

Councilwoman Jolien Caraballo then jumped on the Becker Road bandwagon in agreement with the mayor, alluding to previous requests for residents along that roadway to keep the present green fringe along the roadway undeveloped.

“If you’re suggesting something like this as a potential, I think that provides the constituency a reason to preserve Becker in the future if we decide to make that change, or a future council tries to make that change,” she said. “I think now you can say we’re going to utilize it for transit and transit connection and not just a greenway, so it’s going to serve a secondary purpose [and] strengthens the argument.”

Her comment encouraged the mayor to go one step farther.

“If we let single-family homes and office and/or multifamily develop, it sure starts to close the door on what can be done cost effectively and feasibly,” he said about expanding the Tradition Trail concept eastward along Becker Road. “But these long-term visions, you’ve got to start somewhere, and there’s no better time than now.”

The Council then voted unanimously in favor of Tradition Trail Phase 2.